New order! Double cheeseburger, fries and a cola? Even better. I think. The news broke early Tuesday morning. United Airlines (UAL), once again a profitable business after the past two quarters, had placed an order with Boeing (BA) for new commercial aircraft.

In full disclosure, I bought some BA stock in the pre-open hours this morning before I knew I was going to write this piece, so I’m long BA small.

The deal is this. United has placed a new order for 100 787 Dreamliner airplanes with an option to purchase an additional 100. These airplanes will be delivered between 2024 and 2032 and will replace older 767s and 777s. United’s entire wide-body fleet consists of aircraft manufactured by Boeing.

More international flights have been added to United’s daily schedule as travel has continued to recover after the pandemic and fleet modernization has become necessary. Chief Executive Officer Scott Kirby explains that swapping Boeing wide-body for Boeing wide-body rather than switching to the Airbus (EADSY) A350 makes sense in terms of storage space given the smaller size.

The order also includes 56 additional 737-Max aircraft with an option for 44 more. This adds to existing orders for 300 new single-aisle (narrow-body) aircraft placed with both Boeing and Airbus last year. Collectively, at (dubious) list prices this deal is worth tens of billions of dollars to Boeing.

Readers may have noticed that JP Morgan five-star analyst (on TipRanks) Seth Seifman reiterated his “overweight” rating on Boeing on Monday and raised its target price from $170 to $200. news on Tuesday morning and in response to reports that a potentially very large order (up to 500 aircraft) was to be placed in aggregate with both Boeing and Airbus from Air India.

Boeing will report the company’s fourth quarter at the end of January. The company is coming off a tough third quarter. In fact, Boeing is coming off a tough few years, posting losses for 12 of the last 15 quarters. Much of this is due to well-documented problems with some of the company’s aircraft, most notably the 737-Max which has been involved in more than one fatal crash. The rest is due to the pandemic.

That said, here is still a major American-based industrial firm that employs more than 140,000 people, is one of two global firms producing commercial aircraft in large numbers, and remains a major defense/government contractor. The other big defense contractors have all hit the ball out of the park this year. The other defense contractors are not heavily involved in the production of civilian durable goods.

For the current quarter, Wall Street is looking for an adjusted EPS (GAAP EPS will be higher) of 0.24, but the estimates are all over the map. The range of 15 sell-side analysts’ expectations is that this number is anywhere from a loss of $1.36 to $1.30. In other words, these analysts have no idea. Revenue printed at $19.5 billion, ranging from $16.9 billion to $23 billion. I can’t make this stuff up.

The balance sheet has been remarkably stable for a company that’s been through what Boeing has been through. I didn’t say anything overtly positive. I said “stable”. In September, the cash balance stood at $14.257 billion, up from the previous two quarters. Inventories were about unchanged from any quarter ever for Boeing at $79.777 billion. The current ratio of 1.22 is fine. The quick ratio (out of stock) of 0.21 isn’t something I’d give a “five” on, but it’s pretty normal for this company.

Is it a good budget? He won’t win any gold stars or be called “fortress-like” anytime soon. That said, it’s working for now. The debt load must be reduced relative to the available cash. Hard to fault the stock level especially if orders are about to burst.

Personally, I think the name could be worth an investment if you consider that United’s order is not a one-off and that several airlines will have to modernize. The name is a pretty decent trader either way.

I don’t love the recent free cash flow story nor do I love that balance sheet. That said, large orders have a way of correcting these things.

Tell me, what do you see? 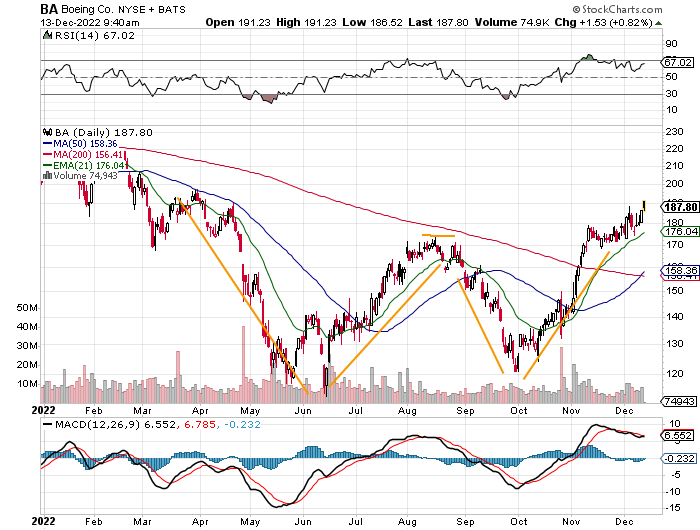 Double Bottom Reversal with a $173 Pivot? 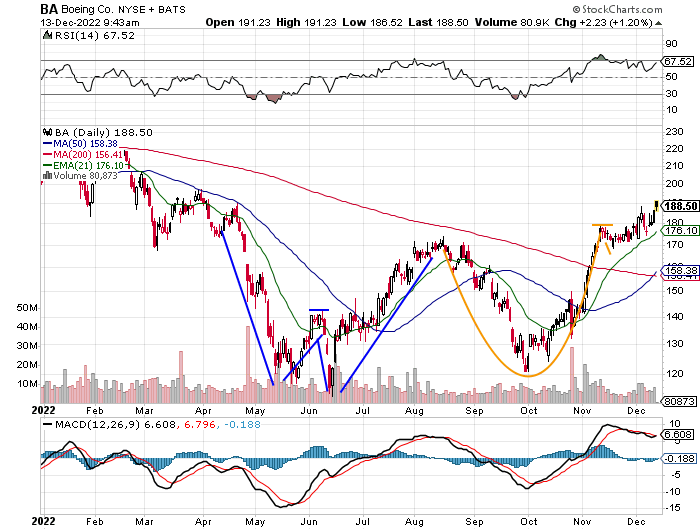 What you see matters. It matters how you plan. The daily MACD has improved. Relative strength is strong without being perversely overbought. Note the “golden cross” (the 50-day SMA breaks above the 200-day SMA).

If you see the first chart like me, well, I’m long stocks, though not many. My target price is $199. I will be buying the stock up to the 21 day EMA as part of an attempt to raise my long. I will panic if I see my $173 pivot fail.

If you see the second graph, the first pattern did what it was supposed to. The $142 pivot provided a breakout that came in at $173. The $179 pivot handle cup would yield a target price of $206. The add and panic levels would remain the same.

Of course that’s how I see it. How do you see it?

Receive an email alert every time I write an article for Real Money. Click “+Follow” next to my signature on this article.

Cold and low on cash? Here are 4 hot states that won’t tax your retirement income at all, no matter how old you are or how much money you have

Brokered CDs pay more than traditional CDs – should you buy them now?

Bearish Bets: 3 Stocks You Should Consider Going Short This Week